Enter for a chance to Win a Free Vacation!

READY TO PLAN YOUR SHORE EXCURSIONS?

Montréal is truly an experience: old world charm, French joie de vivre and a modern style all its own. Montreal is a stunning city to visit and there is so much to see. Along the St. Lawrence River many people come to take a horse-drawn calèche ride through cobbled streets for romantic moments. Just miles away are the skyscrapers of the city as they tower above the city’s businesses and restaurants. Montreal is the world’s second largest French-speaking City. It's top ten attractions are: The Biosphere, Old Montreal, Biodome de Montreal, Musee d'Art Contemporain, Montreal Botanical Gardens, Chinatown, Notre-Dame Basilica, Insectarium, Cours Mont-Royal, and the Canadian Centre for Architecture.

Because Quebec City is Canada’s most historic city and the only walled city in North America, it was classified by UNESCO as a World Heritage Treasure by. Visitors are greeted by an authentic, profoundly French city. The city features winding, cobbled streets with 17th- and 18th-century stone houses and churches, graceful parks and squares, and many monuments. Great emphasis has been placed on Québec nationalism, and the city has become a symbol of glorious French heritage. Visit the oldest church in Québec, Our Lady of Victory, dating from 1688. See the cellars of Maison des Vins, where Québec Société des Alcools sells more than 1,000 kinds of rare vintage wines in a warehouse dating from 1689. See the exhibits at Civilization Museum. The most striking building is celebrated landmark Château Frontenac. Looming high above St. Lawrence, the turreted building with its slanting, copper roof is an impressive sight. Built to accommodate colonial governors, it is now a hostelry.

Baie-Comeau is a city in the province of Quebec.  It is on the Saint Lawrence River where the river’s constant presence will leave a lasting impression on all visitors. Traversing the waters visitors will see marine mammals and wild ducks, among other wildlife. Additionally, a network of bike paths crisscross the cities many parks allowing visitors to take in the city's stunning architecture and landscapes.

The City of Corner Brook - in Canada's Newfoundland and Labrador province - is nestled among the Long Range Mountains, which are a continuation of the Appalachian Mountain belt, stretching up from Georgia in the southern United States. Theatre and art are alive in Corner Brook. Corner Brook is Newfoundland and Labrador's "Host City" and is ideally positioned to host major sporting events. Experience picturesquesque Corner Brook from many groomed walking trails or visit the Captain James Cook Monument and bask in the glory of the sun setting over the Bay of Islands. Step back in time at the Corner Brook Museum and Archives or the Railway Society of Newfoundland Historic Train Site. Explore the downtown area and discover unique gifts and crafts and dine out in one of the City's many fine restaurants. Take a scenic drive along the coast of the Bay of Islands or have a more extreme adventure in Gros Morne National Park, just one hour away.

Sydney is located on Cape Breton Island on the east side of the Sydney River. Sydney has a strong ethnic population. As the only significantly industrialized district in Atlantic Canada, Sydney is the heart of Nova Scotia’s second-largest urban cluster. The city’s central business district impresses with the variety of products and services offered by downtown merchants. The town has become an important gateway to the scenic and historic attractions of Cape Breton Highlands and for cruising on the Bras d’Or Lakes. On the city outskirts is Fortress Louisbourg National Park, presenting Canada’s largest historical reconstruction. Here visitors can enjoy a town perfectly restored to its 1740 appearance. A walk on the half-mile Boardwalk promenade in the heart of downtown provides a panoramic view of the harbor. Apart from Louisbourg Fortress, the town also features a railway museum at the Sydney and Louisbourg Historical Society and the Atlantic Statiquarium, a marine museum devoted largely to underwater treasure.

Halifax is Atlantic Canada’s center of business, research and education. Strong emphasis is placed on cultural diversity, historic restorations and the preservation of heritage and culture. The Halifax Citadel Fortress dominates downtown Halifax. Take a stroll along the waterfront past restored buildings and warehouses of Historic Properties, or a walk in delightful Public Gardens, the oldest Victorian gardens in North America. Halifax’s sister city of Dartmouth lies on the opposite shore and is reached via the oldest saltwater ferry in North America. The spectacular view of Halifax harbor makes the trip worthwhile. Housed in former Dominion Building, the Art Gallery of Nova Scotia features Nova Scotia folk art and maritime artists. A two-hour walk will easily show you the major highlights of historic and scenic Halifax. Visit Historic Properties, St. Paul’s Church and Province House, the latter two being the oldest buildings in the city. Granite Springs is rated one of the finest 18-hole golf courses in Atlantic Canada.

The port of Hamilton is a leading offshore business center and main attractions are the island’s temperate climate, pink sand beaches, pastel homes and bucolic landscapes in this idyllic spot in the Atlantic Ocean. Bermuda is famous for high quality British and European imports along with local artistry which includes cedar candlesticks, coral and seashell products, jewelry and local perfumes. Imported goods include Italian and Scottish woolens, European glass, china and perfumes. Front Street is lined with boutiques and duty-free shops. Although there are few bargains, a wide range of British goods may be found at genuine reductions. The Sessions House was built in 1817 when the government was moved from St. George’s to Hamilton. The Golden Jubilee clock tower was added in 1887. Other historic buildings include the Supreme Court, the Cabinet building, Senate Chamber and the Library. Many natural highlights are in Harrington Sound: the Devil’s Hole, the Crystal and Leamington Caves, the Blue Grotto and Spittal Pond.

The port of Hamilton is a leading offshore business center and main attractions are the island’s temperate climate, pink sand beaches, pastel homes and bucolic landscapes in this idyllic spot in the Atlantic Ocean. Bermuda is famous for high quality British and European imports along with local artistry which includes cedar candlesticks, coral and seashell products, jewelry and local perfumes. Imported goods include Italian and Scottish woolens, European glass, china and perfumes. Front Street is lined with boutiques and duty-free shops. Although there are few bargains, a wide range of British goods may be found at genuine reductions. The Sessions House was built in 1817 when the government was moved from St. George’s to Hamilton. The Golden Jubilee clock tower was added in 1887. Other historic buildings include the Supreme Court, the Cabinet building, Senate Chamber and the Library. Many natural highlights are in Harrington Sound: the Devil’s Hole, the Crystal and Leamington Caves, the Blue Grotto and Spittal Pond.

St. George’s Island was the site of the Sea Ventures’s wreck in 1609. Its major settlement, St. George’s, was founded in 1612 and was once the capital of Bermuda. Filled with historic buildings, it contains St. Peter’s Church, the oldest continously used Protestant house of worship in the Western Hemisphere. The parish is flanked by Castle Harbour on the western and southern edges and divided into two halves by St. George’s Harbour. St. David’s Island is linked to the rest of Bermuda by the Severn Bridge, which lies near the U.S. Naval Air Station and the country’s international airport. The people who inhabit this most easterly part of Bermuda are long-time sailors and fishers. St. George’s Parish also includes Tucker’s Town, founded in 1616 by Governor Daniel Tucker on the opposite shore of Castle Harbour.

Newport became important as a resort for wealthy industrialists who built their “summer cottages”, modeled after European palaces, here and elevated Newport to position of “Queen of Summer Resorts.” A tour of the mansions is a must. Newport is also famous as a yachting capital and site of international tennis championships. Colonial Newport boasts a collection of 18th- and 19th-century and pre-Revolutionary buildings. Colonial Downtown is best explored on foot, and much of the town was burned down during British occupation, but enough buildings survived to rival Boston in number of original 18th-century homes. George Washington’s assurances to Newport’s Jewish community of religious liberty encouraged them to build Touro Synagogue in 1763, making it the oldest in the nation. St. Mary’s Church is the oldest Catholic parish in Rhode Island. The Grand Newport Casino and International Tennis Hall of Fame held the first national tennis championship in 1881 and is now Tennis Hall of Fame with a museum on tennis fashions and trophies.

New York City is a captivating, awesome, and glamorous empire. There are countless museums, theaters, restaurants, parks and towering skyscrapers. It is a shopping capital of the world. In midtown Manhattan are most of the designer boutiques; Fifth and Madison Avenues are locations of such world-renowned department stores as Bergdorf Goodman, Lord & Taylor and Saks Fifth Avenue. FAO Schwartz is one of the largest toy stores in the world. New York is also a world-class culinary experience - with pockets of ethnic restaurants: Chinatown, Little Italy, Little India and Little Brazil. The famous Statue of Liberty sculpture symbolizing the American Dream can be reached by ferry from Battery Park. Once the first stop for over 12 million immigrants, Ellis Island now houses the Museum of Immigration, including the American Immigrant Wall of Honor. The Art Deco Empire State Building is one of the world's best-loved skyscrapers with two observation decks. Also take time to visit the Chrysler Building, Radio City Music Hall, and St. Patrick’s Cathedral.

The Upper East and Upper West: Tales of Money and Scandal

The Life of Alexander Hamilton

The Floor is Yours at Madison Square Garden

The Origins of NYC Sightseeing Program 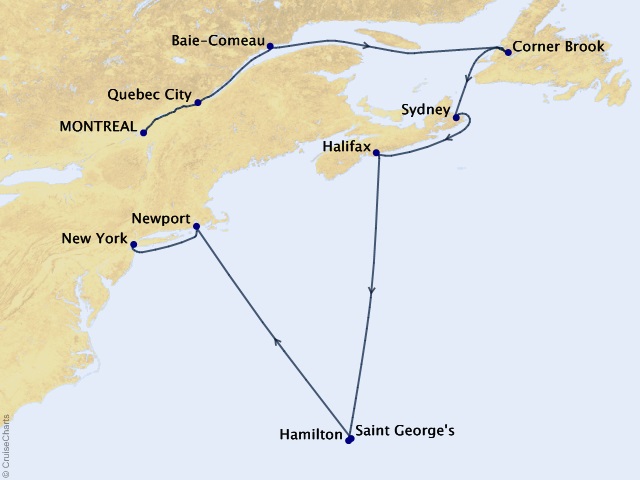 Itinerary subject to change without notice. Please confirm itinerary at time of booking.

Fares are in US dollars, cruise only, per person, based on double occupancy and include fees/taxes. Price does not include airfare, transfers and airline government fees and taxes.

Remarks:
All fares and offers are for new bookings only, are capacity controlled and subject to availability, may not be combined with other offers and may be withdrawn at any time without prior notice. Fares are in US dollars, cruise only, per person, based on do

All prices per person and in USD unless otherwise stated.
Offer ID:
1438447

Reference this number when contacting our agency so we may better serve you. Also keeping this number handy will allow you to locate this document again quickly.

Information and pricing is subject to change without notice. While we do our very best to ensure that information and pricing appearing in this website is complete and accurate, we cannot be responsible for incomplete and inaccurate representations, which may or may not be under our control. In the event of a pricing error, misrepresentation or omission, we reserve the right to adjust the pricing or make any other corrections.